Furry Finances: The Average Cost of Raising a Pet is £10,975

A new online tool works out how much money users spend on their pets over each animals' lifetime. 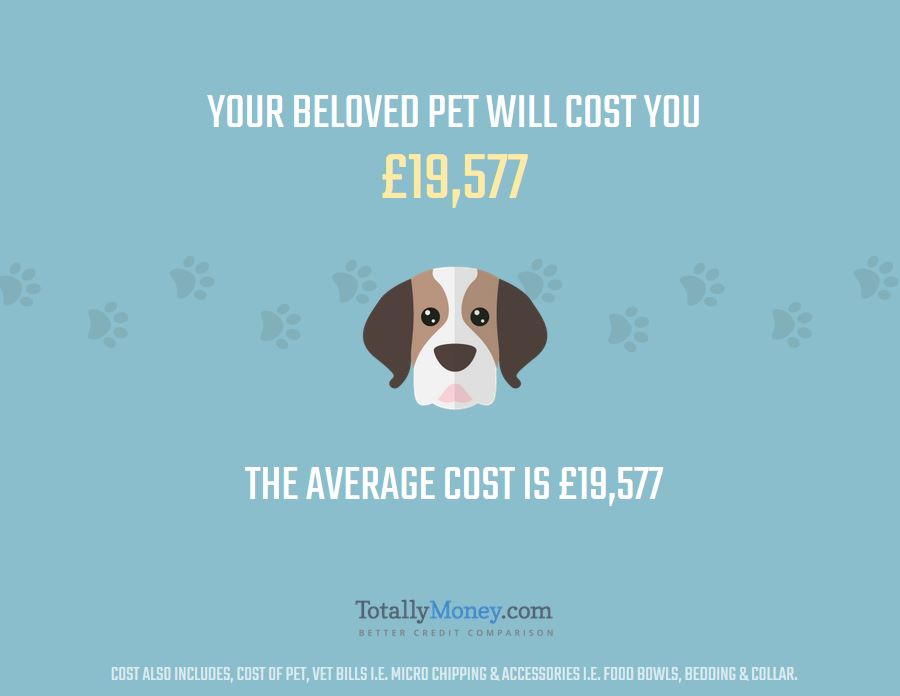 Do you dote on your dog or spoil your snake? A brand new interactive tool from credit comparison experts TotallyMoney will reveal exactly how much your favourite members of the animal kingdom cost you over the course of the creatures' lifespan. The pet cost calculator is published alongside a survey and an eye-opening infographic, which reveal precisely how much the UK's estimated 13 million pet owners spend on their animals on average. With information on every animal from large dogs, to snakes and birds, the new tool and infographic have been developed for animal lovers of all stripes (and spots, and scales). With TotallyMoney's research revealing that nearly 25% of UK pet owners would cancel social plans to be with their pet, it's clear that the UK is a country of pet-obsessives. But how does this passion for pets translate into cold hard cash? The latest figures suggest that Brits spent a record-breaking £7.16bn on their animals in 2015 as pet pampering became ever-more prevalent, a growth of 25% since 2010. From grooming and treats, to personal trainers and pet clothing, the range of products and services many pet owners are now willing to invest in for their pets is ever-growing, as splashing out on our animals becomes increasingly fashionable. In fact, TotallyMoney's survey revealed that 51% of dog owners would consider paying more for their pet’s healthcare than their own. But despite the growth in pampering for dogs and cats, the title of “most expensive pet” over the course of its lifetime belongs to a rather more sedate contender: the tortoise. According to TotallyMoney's fresh research, the slow and steady tortoise costs £25,787 over its average of 75 years – that's a lot of lettuce. The tortoise may not be everybody's first choice of animal companion but, with a steep price tag, a lifetime's commitment and 40% of owners claiming they take their tortoise on holiday with them, there's clearly a lot of love for these lettuce-munching creatures. The UK's most expensive pets

For the 35% of fish-owners who claim their aquatic pet makes them feel more relaxed, there's some good news. Goldfish are the UK's most affordable pet. With costs amounting to £914 over a typical 7.5 years, this soothing species is the ultimate low-cost pet option. In an age of celebrity pets and cult animal Instagram accounts, it's more tempting than ever before to take on animals flippantly. These fresh resources are an informative antidote, packed with facts and helpful calculations, ideal for keeping your eye on your spending and educating users about the true costs of pet ownership. Yet the TotallyMoney survey results also reveal that, despite the costs, only 2% of UK pet owners regret getting their animal and have considered getting rid of it. In fact, 95% of dog owners consider their four-legged friend to be a family member. Even after telling cat owners that their pet would cost them the same amount as a deposit on a house, 88% claimed they'd rather have the cat. Whatever the cost, there's clearly no preventing Brits from pampering their pets. For even more mind-bending statistics about the UK's pet obsession take a look at TotallyMoney's brand new infographic.   METHODOLOGY How we determined the average lifetime cost of each pet: