From Punting to Prostitutes

If ‘you are what you Google’, what do popular searches reveal about the things people really want to spend their money on in the UK and Ireland?

Forget the price of a loaf of bread or how much you have to pay for a pint of milk, we’ve uncovered the real cost-of-living concerns of people from Exeter to Edinburgh.

The method was simple. By typing ‘how much does * cost’, ‘how much do * cost’ or a similar price enquiry for each location, we put together a list of the predictions that filled the blank. Google’s autocomplete feature is based on an algorithm reflecting, among other factors, the number of times a term has been searched for in the past.

Alongside typical outgoings like ‘parking’ and ‘council tax’, the results provided an amusing and somewhat surprising overview of the UK’s cost obsessions.

Cosmetic procedures are a common Google trend across the UK, with liposuction popular in Perthshire and Botox in Essex, Norwich, Nottingham and Glasgow. In Liverpool, locals appear to have swapped over-plucked Scouse Brows for self-help with Hypnotherapy ranking high. 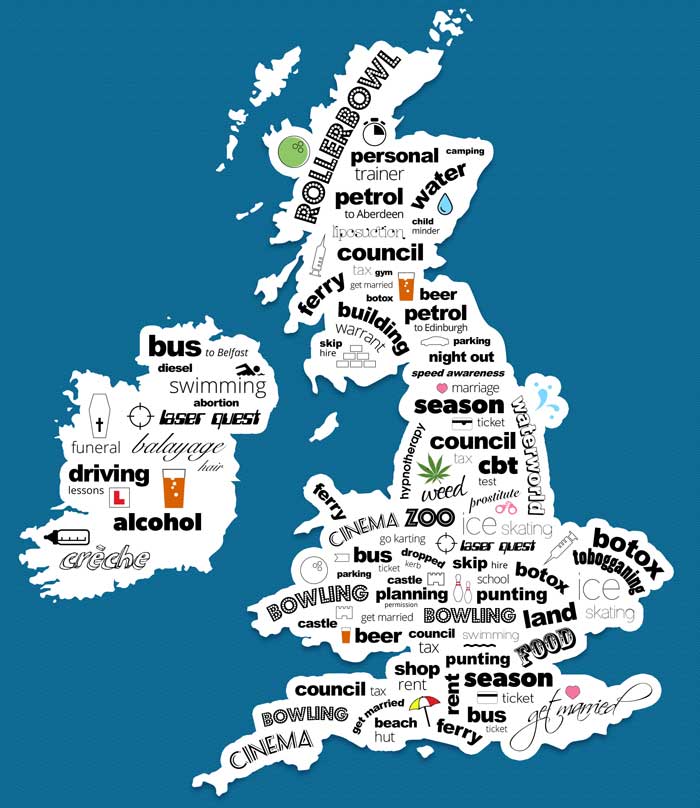 Mapping our mores: There’s more to life in the UK than house prices and the cost of milk

Elsewhere, beer in Edinburgh and Cardiff and the cost of a night out in Newcastle are a firm priority. Some of the results come as no surprise, like punting in Oxford and food in London. Yet, others break their clichés entirely. Tobogganing in Ipswich, anyone?

More sinister prompts include weed in Manchester, prostitutes in Sheffield and funerals in Galway. But perhaps most controversial was the result of abortion in Belfast, where the procedure is currently illegal.

Luckily, not every result read like a checklist for a CSI script. Love is in the air with the cost of a marriage licence skyrocketing in multiple locations. Plus, there are plenty of light-hearted searches, such as a dropped kerb in Birmingham and ice skating in Grimsby.

After all, who would have thought that Britain was a nation of bowling enthusiasts?

What are people searching for near you?

Explore the full list of the UK’s cost obsessions – click the table headers to sort the columns.

How does your hometown match up? Let us know. Tweet us @TotallyMoney with #UKCostObsessions