Would you pay £3,744 a year for 10 extra minutes in bed? The effect of Tube journey times on London weekly rents

We’d all like to live a bit closer to work, but how much are you willing to pay for the privilege? Is the extra time in bed worth the extra cost?

We’ve redrawn the London Tube map to show how much weekly rents change as you move closer to more central locations. For each line, we took the station with the most expensive average weekly rent as a starting point. The map shows journey times from there to other stations, along with the average rents of one-bedroom properties nearby.

It’s a well-worn cliché, but the map really shines a spotlight on the importance of location. Whether it’s closeness to work, affordability, or a mixture of the two you’re looking for, we’ve made it easier for you to find the next place you might call home.

Use the map to see how much a few extra minutes in bed could cost you, or how much you could save by getting up a few minutes earlier. 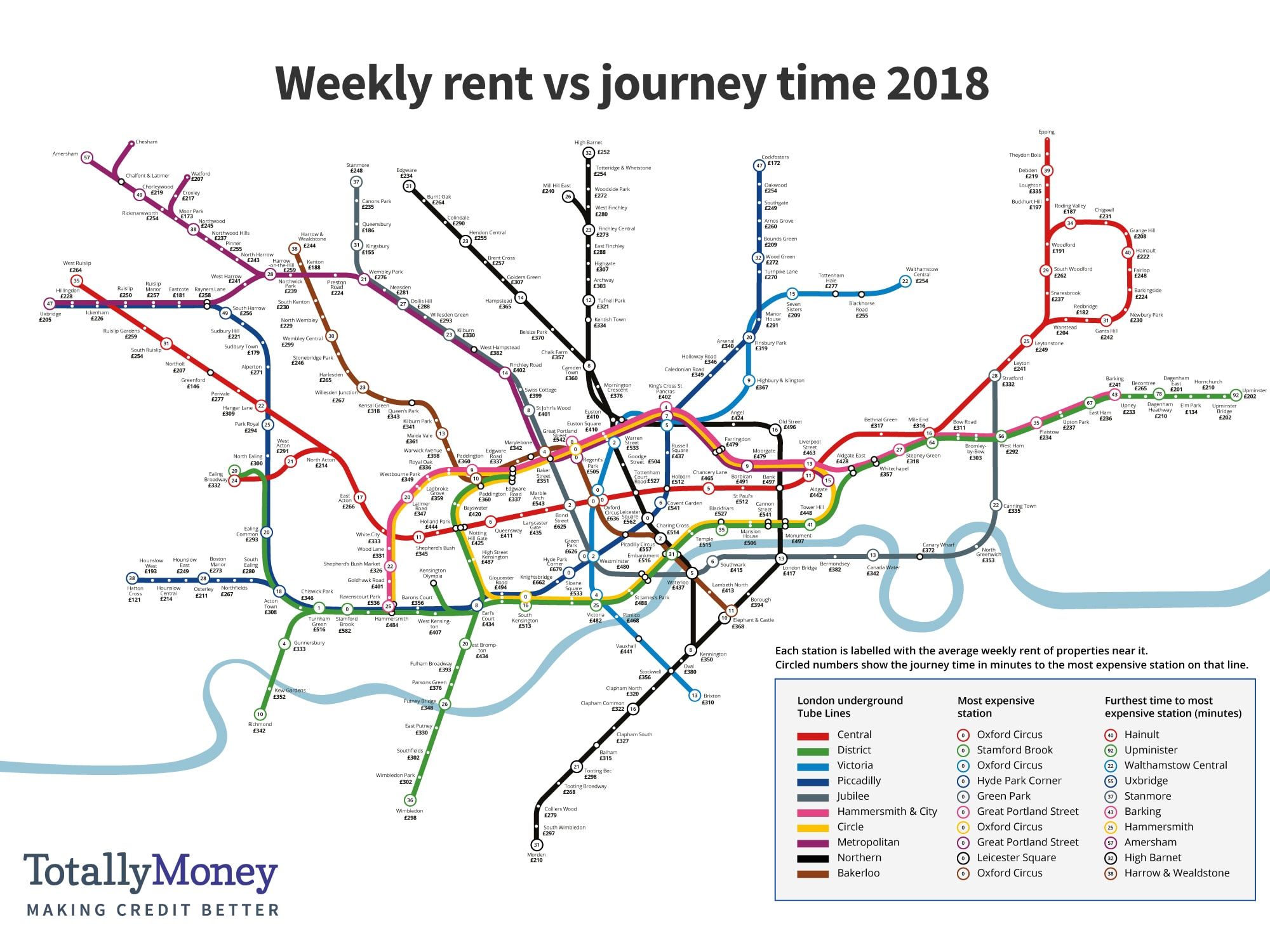 On average, Londoners pay £7.20 for each minute shaved off their journey time.

To put this into perspective, a paltry 10 extra minutes in bed can set you back £72 per week on average. That’s £3,744 each year, the equivalent of over 10% of the average London salary.

However, pick your location carefully, and you don’t necessarily have to be a high earner to take advantage of shorter journey times.

Taking into account journey time and average weekly rent, here are the top 10 locations that offer the best value in terms of both time and money.

The Central line surfaces as a clear winner, as Greenford, North Acton, East Acton, and Redbridge all feature in the top 10, with journey times to Oxford Circus of less than 30 minutes. So, if you want the time in bed, you should stick with red. Just stay clear of Loughton. That’s the wrong side of the red.

Seven Sisters on the Victoria line takes the top spot, with a journey time to Green Park of only 15 minutes, and an average weekly rent of £209. While the rent may seem quite high, it’s still far below the average rent across the whole of London.¹

Life on a Northern line…

Using the same methodology as above, here are the 10 worst performing locations for both time and money.

Two lines perform most poorly: Northern and Piccadilly. Piccadilly line stations Turnham Green, Leicester Square, Convent Garden, and Hammersmith all feature in the bottom 10, as do Northern line stations Old Street, Moorgate, and Bank. In the spirit of fairness, though, only Hammersmith and Turnham Green sit outside Zone 1, which might be why the others fare so badly for price.

Hammersmith takes last place overall, with an average weekly rent of £484 — far above London’s average rent, and far more than it would have been during the days of Richie and Eddie. Hammersmith also has a comparatively long journey time to Great Portland Street (the most expensive area on the Hammersmith & City line), considering how much you have to pay.

Unlike toothbrushes, pink and blue don’t mix well — not when it comes to the London Underground, at least.

If affordability is a priority for you — and you don’t mind longer journey times — you’re in luck. Here are the places that offer more bang for your buck (you can sleep on the Tube, after all).

The most expensive places…

Here are the places that could see you paying through the nose. But, if you can’t put a price on as much sleep as possible, you might think they’re a steal.

The best and worst value stations for travel time vs rent

Use our interactive tool to see which London Underground stations offer the best average rent price vs travel time.

The data: Every station’s rent and travel time from central London