Virtual reality night: How to stay at work but escape the office 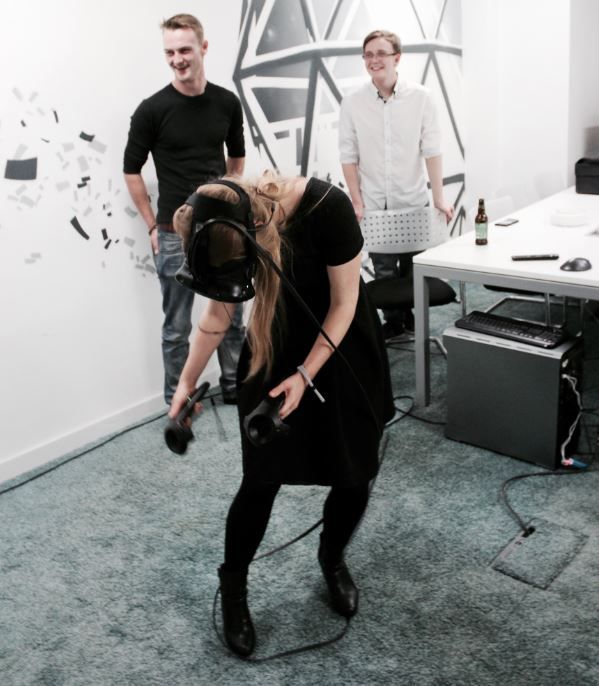 Twenty years on from the release of Jamiroquai’s hit song Virtual Insanity, we brought Virtual Reality (which I always sing to the same tune) to the TotallyMoney.com office for an immersive social - quite different to our usual events. Instead of going out of the office on a trip or finding a venue for some food and drinks, we chose instead to subject staff to zombie attacks, invading hordes, space pirates and – the horror – balloons. This year’s big news for tech consumers – the release of several major VR headsets for domestic use (albeit on a pretty punchy price tag) has had a lot of us desperate to try them but unable to do so on a budget. Thankfully, with help from the team at Virtual Reality Experiences, we at TotallyMoney.com were able to hire three sets of the current leaderboard-topping option: the HTC Vive. Using unique room scale sensor technology, the Vive allows not just some movement, but complete immersion in a virtual space – a 15 x 15ft grid tracked with the VR headset and handsets that let you grab objects and manipulate your environment. What does this mean? Well, it means you can paint in 3D space, revolving your camera angle or actually physically moving around an artwork; it means you can pick up a bow and arrow and shoot barrels of explosives; it means you can juggle a torch and a machete while zombies approach you from all sides of a pitch-black abandoned town square. This last one, a scene from The Brookhaven Experiment was probably the stand-out hit of the night, not only because of how fun it was to play in person, but also how entertaining it was to watch others play. Warning: may contain screaming. https://www.youtube.com/watch?v=6qLgkIRjd0A&feature=youtu.be