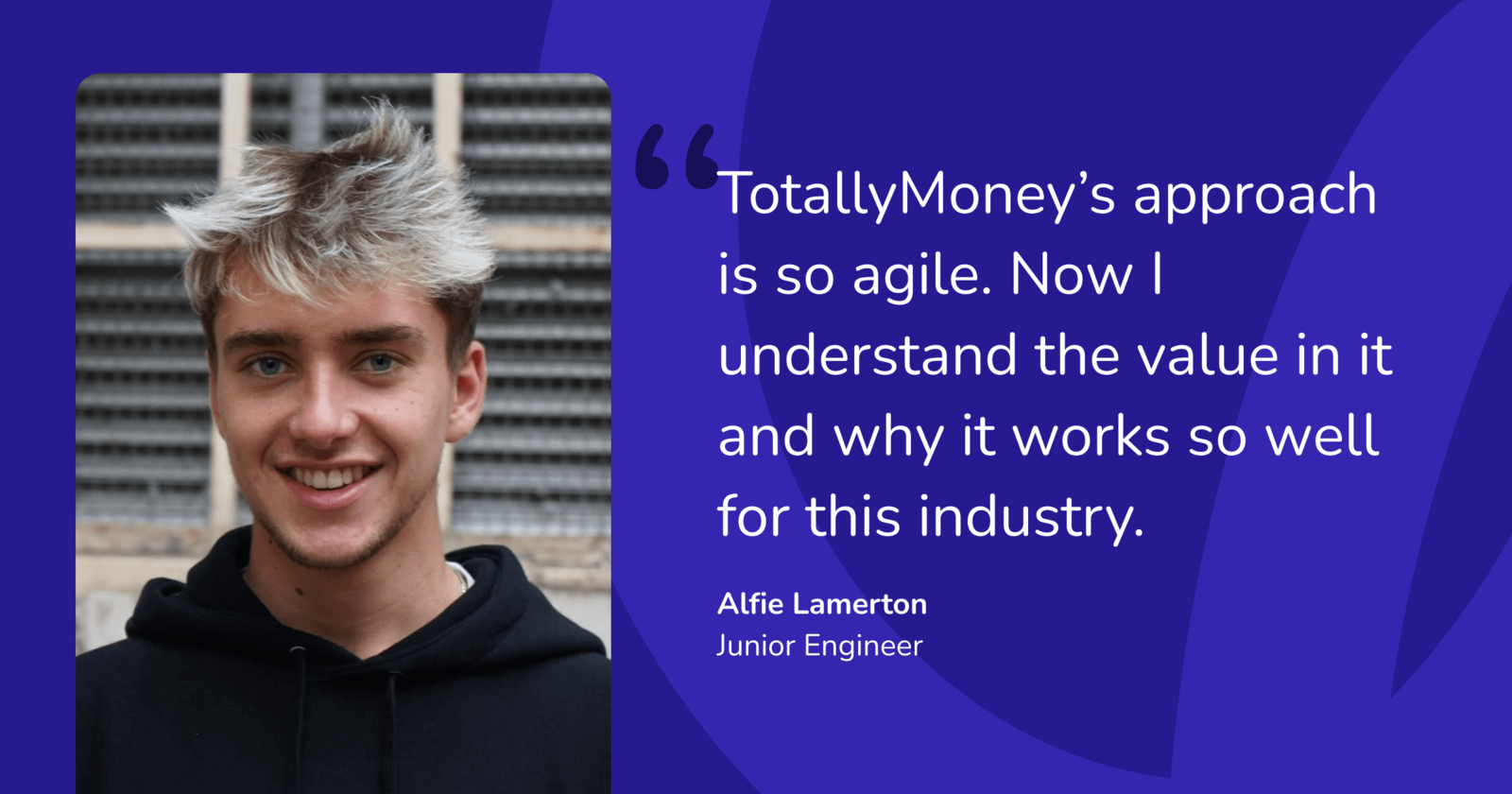 AM to PM at TM: Alfie Lamerton

AM to PM at TM: Alfie Lamerton

To give everyone better insight into how we work at TotallyMoney, we’re taking a look at different teams in the company. We’ll ask questions to those who actually work in each department, to gain more of an understanding about who they are and what they do.

Today we’re speaking to our university placement engineer, Alfie Lamerton, about how he came to be at TotallyMoney, what he's learnt whilst here, and what he’ll take away as he goes into his third and final year.

So, Alfie: how did you find yourself at TotallyMoney?

I was using Google maps to search around London, looking for tech companies, and found TotallyMoney. When I was browsing the TotallyMoney careers page, there was an application open for a backend engineer, so I filled out the form, and put something in the message box like “I’m not an engineer but I’m a 2nd year computer science student looking for a placement, do you have any vacancies like that?”.

Shortly after that I got an email from the head of people, who interviewed me, and put me in touch with Steve (now my manager). He gave me TotallyMoney’s backend technical test and helped me with my solution. By May 2021, the placement was confirmed, and I joined TotallyMoney in July!

What have you learned in the year you’ve been at TotallyMoney?

I think the main thing has been my working ethos, and my discipline in terms of work. I’ve learnt how to improve that, and how I can work effectively in a team or squad setting.

I guess I didn't expect it to be so — I can’t think of a word for it — agile. Every day is just so flexible, so iterative and dynamic. And I now understand the value in it and why it works so well for this industry.

What’s changed in terms of time management? What have you learnt over the past year?

Well, first of all, I started using a calendar. I've never used one before like that. I was able to organise my day better. Then I implemented techniques that I had been using at uni like 'pomodoro' and 'eat the frog'.

I also realised I was a lot less disciplined for a role like this than I thought. So I had to grapple with my own attention span and accept that it wasn't going to be nearly as well-trained as the engineers I was working with.

I had to lower my expectations of just how quickly I was going to pick that up. It was mostly employing pomodoro techniques and trying to get into a focused mental space, getting into flow, being able to work more deliberately, and be very patient with myself.

So that’s going to put you in good stead for your final year at uni then?

Definitely. I now know what I need to work on moving forwards. I’m excited to combine that with all the technologies that I've been introduced to at TotallyMoney, as well as the agile approach. This knowledge means that I feel truly prepared for my final year, especially compared with my second year.

Switching that around — have you been able to put into practice anything you like at uni, while at TotallyMoney?

I was actually reintroduced to them by Goncalo [Goncalo Castro, senior engineer at TotallyMoney]. He helped me better understand the approach I was already taking to my programming, then refining it using the principles I was familiar with thanks to learning them at university, but hadn’t actually used before.

Thinking a bit more broadly, my education on object-oriented programming helped me massively with the work I did on my placement.

So, now at the end of the placement: what’s something you’ll take away from it?

I’ve always had an issue with imposter syndrome and thinking ‘can I actually do this?’. I would always ask myself whether I can actually be a software engineer or whether I was just deluded. Sometimes it would feel like I was putting up a façade, and people were going to realise I was way out of my depth.

However, the more things I’ve done at the company, the more I’ve realised I am more than capable, it just takes patience and true effort. I’ve learned to be patient with myself because it’s not an overnight thing, but I’ve also realised I could still be leaving a lot on the table. On my placement, I’ve shown myself that I can do things that in the past I would have sold myself short on. I’m very excited to see what the future holds. Thank you TotallyMoney!