Coffee shop UX - a cup of feedback to go

So, guerrilla user testing. Sure, we've all heard people say: “Just go to Starbucks and offer people coffee in exchange for testing your app”, but to me that raises a whole bunch of questions: What kind of testing can you get out of bothering people? How can you know they are the right type of user? How is the feedback you get going to be affected by the noises and distractions around you? I could go on.

While this type of testing is not meant to be scientific and perfectly laid out, the general concept undoubtedly has its perks: it's quick, cheap, doesn't require extensive preparation and it's a completely open conversation with potential users that can, and should, drift from the script. Now, we're not here to say that after trying it once we're suddenly guerrilla testing experts and advocates, but we had proof that those perks are real and worth the investment, once established that you know what you're getting yourself into and you have the right expectations. 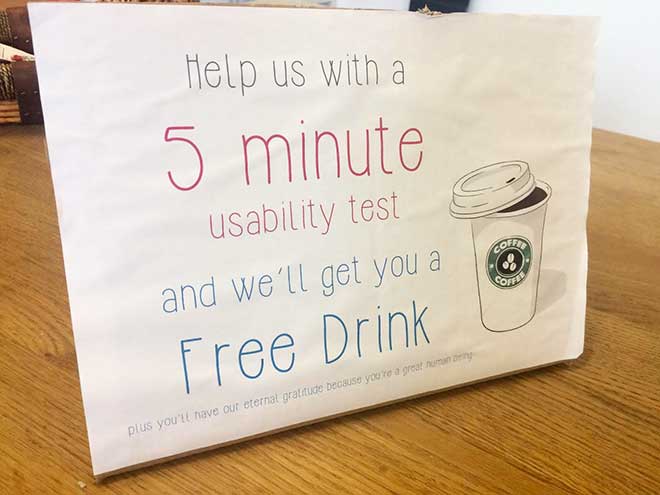 Have a simple plan

Here's what we did:

Our plan was to ask people about their knowledge and perception of certain topics related to the product we are trying to develop, plus we had some extremely early-stage, Balsamiq-mockup-produced sketches to gather feedback on. As a designer, I would never normally show sketches and wireframes to a non-designer for the simple fact that they are too abstract for anyone else to understand. However, this was meant to be a quick 'n' dirty test to validate the product concept, and the drawings were mainly there to give people something visual to latch onto and elicit further conversation. As long as no one expects to be getting actual design feedback, it's fine.

Each session was interesting and unique in its own way and we learned a lot:

In the end, we interviewed five people in three sessions (two friends and a couple were interviewed together, which was unexpected and interesting) in two-and-a-half hours, for a total of £21.35. Of all the people we approached, only one declined, saying that he was in too much of a rush.